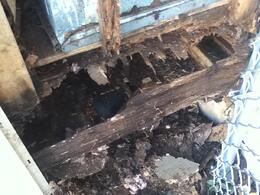 Ever wonder what years of water build-up on untreated wood will do? The answer is simple: Lots and lots of rotten wood!

Steve Way Builders, LLC was recently contracted by the homeowners of this Lansing, Michigan home to investigate the source of some water damage showing on some drywall within the home. Upon further investigation, the source of the water problem was unmistakable. For roughly 20 or more years, water was running within the wall of the chimney due to improper roof flashing.

To fix the flashing and water damage problem, Steve Way Builders, LLC needed to re-flash the chimney and fix any wood that has been damaged. After removing the vinyl siding and sheathing on the chimney wall, the water damage was extensive. The sheathing was completely rotted away, as was one of the 16' wall studs in the chimney wall. Also badly rotted was the floor joist and subfloor system of the cantilevered chimney base. 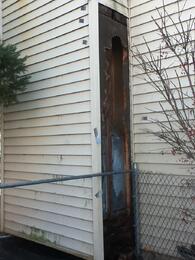 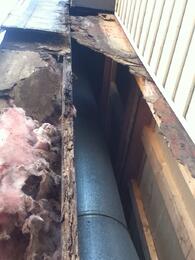 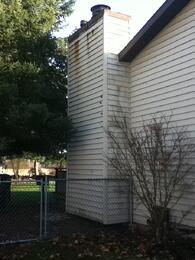 As seen in this home, poor roof flashing can cause major problems within a home. The best way to prevent water damage is to have the job completed correctly the first time around. Unfortunately this is not always the case. When you find yourself with a water leak, fix the problem as soon as possible to prevent mold build-up and to keep the costs to fix the problem as inexpensive as possible.

What other suggestions to do have regarding water damage and roof flashing? Have you found yourself in a similar situation?